This Morning presenter Holly Willoughby has a full figure with cola bottle curves so when she wore a tight red dress today co-host Phillip Schofield couldn’t keep his hands off her. Holly, who had been learning how to make a pizza looked stunned as he grabbed her behind, but appeared to take it in good humour as Phillip later posted a picture of his handprints on his Twitter page. He accompanied the photo with the caption: 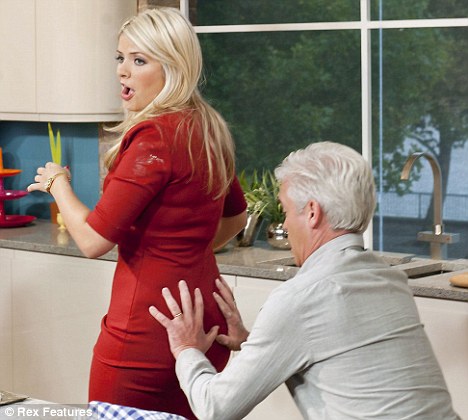 Plain flour? @hollywills ? The temptation was just too much! 🙂

The options in the poll are taken from Twitter comments:

And, talking of Keith Lemon, this is the recent F/M spanking that Holly dished out on his Celebrity Juice gameshow. Starts at 50 seconds.

The lady holding up the card is of course a former Brit Bot of the Week herself.

5 thoughts on “Brit Bot of the Week”