Well 2011 ended with a bang and I don’t just mean the fireworks – this site’s viewing stats were at an all time high! So what better time to freshen the place up with a new design and banner image? Fetish superstar Amber Dawn is the latest in a distinguished line of celebrities to find themselves reclining artfully across The Spank Statement header. The bespoke picture that Amber sent me was revealed last year in this post. (Applications are now open to anyone who wants to submit a banner for 2013 by the way!) 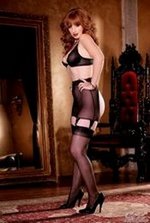 2011 ended with a personal triumph for Amber too. In December, she achieved a long held ambition by becoming a magazine cover star for the first time.

The awesome top picture was taken by Holly Randall and appeared in an earlier edition of Hustler’s Taboo magazine in 2010. Holly Randall’s work has been featured on The Spank Statement before as you can see here.

I don’t know about you but I’ve got a really good feeling about 2012, and I hope to carry on bringing you the kind of spanking bloggery that no self-respecting cyber perv would want to miss. And with a super hot curvy redhead at the top you’ve got to admit that every post in 2012 will at least get off to a good start!

5 thoughts on “A New Year Dawns”