The annual No Pants Subway Ride, is organized by the New York City collective Improv Everywhere. Participants are supposed to act as if there is nothing strange as they enter a subway car without pants in the middle of winter. If asked, they claim that they simply “forgot” their pants.

It all started as a small prank with seven guys and has grown into an international celebration, with dozens of cities around the world taking part each January. Breaking a social taboo and seeing the reaction of people not aware of the event generally makes it fun for participants and photographers alike.

So let Harry be your guide as he takes you down in the subway on No Pants Ride day and brings you the highlights from the past few years of the event:

Some of the most enjoyable images show the participants in everyday underwear as they are going about their everyday business. This is in the spirit of the instructions for the event: riders are asked not to wear comedy underwear which indicates that they are taking part in a prank. 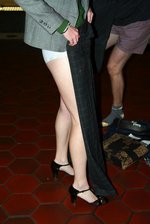 In practice there are a lot of slogans plastered across pert rears which are obviously meant to be seen and, in the case of the girl in the purple panties below, impossible to argue with! 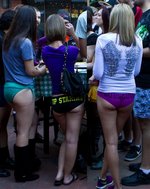 The undies worn by the ladies in this group are less attention-seeking and a nice range of colours and modern styles are on display.

Occasionally there’s even more to be seen, though the
organizers do ask riders to avoid excessive exhibitionism. (Thongs are specifically banned.)

The event has a spin off too in the shape of its summer time cousin, the New York Underwear Run. 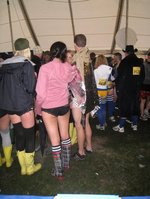 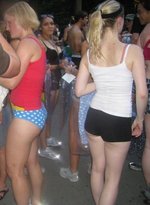 And just occasionally, there’s a bit of bottom smacking involved. The girl with the Cookie Monster panties has a very nice bottom.

And before the day is out, that bottom is going to be smacked.

And here’s a paddling, though with a singularly unsuitable instrument of punishment! 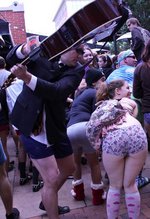 At the end of the journey pants are hastily pulled on and normal decorum is restored.

8 thoughts on “No Pants Subway Ride”