As I was saying in the previous post, the rigid hierarchies and strict discipline of army life lead to rich pickings for any spanko who can’t resist the allure of a lady in a shiny-buttoned uniform. So with the help of JS666, who found most of the images, let’s explore this theme in a little more depth:

From Brigitte Bardot in Babette Goes To War to Lara Croft, not forgetting a couple of personal favourites along the way – Goldie Hawn in Private Benjamin and Honeysuckle Weeks in Foyles War – military babes are officially hot and a lot of artists seem to think that their bottoms should be too!

Both these cartoons have officers pulling rank over their female subordinates in a way which anyone would find more than just humorous. 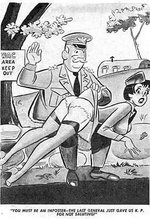 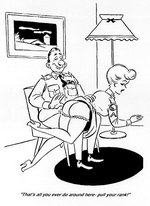 In this one by the great Brian Tarsis the only rank-pulling that’s going on is man over woman! An ordinary GI spanks a WAC on the bare bottom for no apparent crime other than wearing a skirt and carrying a handbag. The real excuse for the spanking is perhaps that the artist wanted to work some corny puns into the speech bubbles.

The comic strip Terry and the Pirates had an unusual F/F spanking set in the Second World War which first appeared in the late 1940s. According to the Chicago Spanking Review:

We don’t know the details of this storyline, but it obviously takes place after Terry had joined the Air Corp in World War II. A female sergeant finds it necessary to spank a female private in private, but it’s within earshot so everyone knows what’s going on. There’s some nice rubbing afterward, so overall this is a very satisfying F/F scene.

These fetish-based takes on army disciplinary proceedings are quite realistic, and the officers look well cast in their roles. I believe the lower two pictures are from a 1980s British production.

Something like the above would have been perfect in Female Agents (2008) which featured four of the most spankable French women in army uniform ever captured on film.

It’s based on some real life war heroes of the French resistance but the lead characters are far from idealised and get portrayed as feckless and disobedient at times. Deborah Francois, the blonde on the far right, especially caught my eye.

The still below shows a long and sturdy wooden table – perfect for bending all four of them over at the same time. The male officer seems to have caught Deborah Francois in possession of an illicit cigarette, and just look at the way her bottom fills out the seat of her pants as she perches on the stool!

On the left below we have some actual women soldiers in tight pants.

On the other hand, the marching ladies from Russia and Poland wear above the knee skirts and heels, so take your pick. (Looks like the cameraman in the top right picture is trying to get an upskirt shot!)

JS points out that accounts of corporal punishment of women in the armed forces are often dubious. Persistent reports about British practices at naval colleges in the 1940s probably have their roots in male fantasy but that doesn’t stop them being a lot of fun, especially when they surface in respectable newspapers. This letter is just one of a series which were published in the Sunday Telegraph in 2006.

Voice in the Corner has more about these canings here.

But there’s another form of physical punishment associated with army life that women definitely are subject to…forced exercise!

If you haven’t seen it yet don’t miss my military uniform themed clip from Young Catherine in the post below. And if you’ve got any more soldier spanking pictures or stories please share.