Talking about ‘lost’ spanking scenes,i can remember one at christmas in which santa birches a nubile blonde girl-i recall she was dressed in a red ‘baby doll’ with black frilly knickers-this must have been around 1972/3-its probably long since wiped-i think it was on itv.

Can any helpful spanko Santas  add anything to this? It is Christmas after all!! 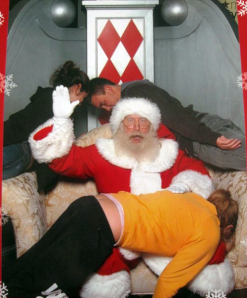 Adding to other people’s posts XIV: The Perils of Mandy – chross.blogt.ch – Chross Guide To The Spanking Internet.

An email received last month has led to another appeal for a Lost Spanking. This one comes from Tim who only dimly remembers a video he saw back in the early 1980s:

I think she goes on to become a model, and I believe there is another caning later on, with a jealous fellow model. For some reason I think Penelope may have been in the title.

Sorry that this is all so vague, but nearly 30 years on my memory tends to be a little faded. Still, if you can help at all I’d be grateful; I certainly enjoyed the scene at the time.

I certainly remember the period we’re talking about here when video rental outlets suddenly appeared everywhere. I must have gone through half the titles in my local newsagents hoping to find spanking scenes, but didn’t have as much luck as Tim! While it was interesting to hear about this I was a bit doubtful about being able to find it considering he didn’t provide a title.

Fortunately Martyn came to the rescue, identifying the film immediately as “The Perils of Pauline” (not Penelope) and it turned out there was a good reason why he knew all about it…

I would imagine that nowadays the school would sue the makers of the film, but back then I don’t think anyone cared. The caning (by today’s standards) is very mild but the girl had a very nice bottom. I have no doubt that in the more innocent times of the early 80’s a lot of young men (and old) found this scene extremely exciting.

About 10 years ago I was in a shop where they were selling off hundreds of old videos and I did see it there on offer for £1! When it came out in the early 80s it probably retailed to video rental shops for about £50!

This sounded like problem solved BUT I couldn’t find any evidence of the film online at all. Just to complicate matters, there are no less than four films with the same title listed on IMDb but none of them are the right one.

So it’s over to you dear readers. Can anyone provide more information about where to track the video down? Or even better, can you share the clip? Please contact me at the usual email (which you will now find top left of the page) if you can help.