The Tour de France begins today, and for the first time ever it is actually starting in the UK. Unfortunately these thong-clad riders are not going to be taking on the London – Canterbury first leg of the race, which would certainly make it more interesting from my point of view.

They were, however, used as part of a bill board advertising campaign to tie in with the event a few years ago. The posters sparked controversy because there were serious concerns that they might distract drivers and cause accidents.

Sloggi advertisements have also come under criticism for being sexist. In France the billboards led to such outrage that even top politicians such as Segolene Royale spoke out against ‘le string’:

“Many headteachers have banned the accessory altogether, which is a very good thing. As far as boys are concerned, the string reduces young women to little more than their bottoms.”

Hmm…since when is wearing a thong sexist? It’s underwear. Granted it’s highly attention getting underwear but it’s still underwear that apparently many women like. It is true though, that some of Sloggi’s adverts seem to be more about the model’s bottoms than the underwear that they are supposedly promoting.

But it must be successful because other companies have copied their style:

Sloggi has also been accused of placing their ads in deliberately provocative locations, such as near schools and mosques, in order to reap the benefit of any subsequent media coverage.

They’ve even sent models to outdoor public locations such as motorway bridges, where they have stripped off and held up boards advertising their website. One such guerilla ad campaign took place in London close to Tower Bridge.

Luckily for us however, there was also a ‘guerilla’ photographer around on the day who made the most of his opportunity: 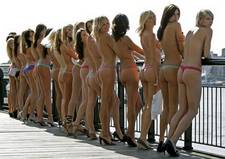 I think my favourite bottom is fifth from the right in the second picture. Can we have a close up of her please?

Yesterday, due to an unforeseen technical error, I posted a photograph of Maria Sharapova in which her panties were clearly out of focus.

This unfortunate problem has been corrected, and Miss Sharapova’s undergarments can now be examined in all their crisp and white glory. The Spank Statement apoplogises for any inconvenience caused.

As compensation I would recommend following this link to another excellent photograph of Miss Sharapova. It surely has to be the ultimate ‘Assume the Position’ picture. It will also provide you with a second opportunity to see the outline of  her VPL in two days.

Once there was only the briefest glimpse of utilitarian sports knicker at tennis tournaments, although it was all the more appreciated when it came. Martina Hingis, for example, used to have a very hungry bum, and how the photographers loved to catch it mid-munch so to speak.

I am pretty sure that the hot-pant trend of recent years was specifically designed to prevent shots like those above. Maria Sharapova’s VPL however in this picture shows that she was wearing panties beneath her hot-pants, which can’t have been very comfortable, and possibly led to a fashion re-think.

Because this year, thanks to ever more daring hemlines and a desire to push the white-only rule to its limit, there has been a virtual fashion parade of pants at Wimbledon. HURRAH!

On Wednesday, the French teenager Tatiana Golovin surprised Wimbledon’s old guard with a striking pair of crimson hotpants under her tennis whites. Apparently the umpire had ‘words’ with her about this. I’d love to have overheard that conversation!

Miss Golovin, 19, claimed the pants did not contravene Wimbledon’s strict dress code as they were higher than the hem of her skirt.

Clothing must be predominately white, but coloured underwear can be worn under tennis dresses – as long as the dress hem covers it. But yesterday, an old hand at the club claimed some players were violating the spirit – if not the letter – of the law:

Strictly speaking, players can wear any colour undergarments they like but it has always been a Wimbledon convention to wear white – especially for the ladies. Lots of people here are not happy about it – they feel these girls are bending the rules to try and make a fashion statement. But there is nothing they can do.

The readers of this blog would have a few ideas about what they could do to put this uppity French Miss in her place. And it wouldn’t involve those crimson knickers staying in place for very long, but it would involve a bottom to match the knickers.

Elsewhere, I can report that Maria Sharapova’s undies are indeed briefer than they have been at recent Wimbledons.

Although the hot-pant look is still being worn rather effectively by Ana Invanovic, (left below).

It is to be hoped however that Emanuelle Gagliardi (right above) will set a trend for next year that all the top players will follow.

There’s something about tennis, and especially Wimbledon fortnight, that seems to bring out the spanko in everyone. All those long-legged lovelies in thigh-skimming skirts patrolling the court get the thermometer rising even when it looks like rain.

And there’s always the chance of some childish behaviour to raise the temperature even further. Perhaps a tantrum over a disputed line-call, or some racket throwing petulance after a missed shot. And then there’s grunting.

One of these days an umpire, instead of warning a player is going to get down out of his high chair, bend her over the net, and say ‘Right I’ll give you something to grunt about young lady!’? He would then proceed to turn her bottom the same colour as a bowl of strawberries and cream.

Yes, it’s a highly promising time of year for the spanko-media watcher. Virtually every newspaper or publication you turn to has pictures that frankly would not be out of place in a spanking magazine.

I’m sure you all had your favourite players in the past – whether its the icy aloofness of Chris Evert, the brattishness of Monica Seles, the classic model looks of Anna Kournikova, or the athletic girlishness of Maria Sharapova that did it for you – there will be plenty of similar interest to come in the following two weeks.

And plenty more shots of sexy female players either flashing their knickers, bending over with their bottoms in the air, or simply looking gorgeous from behind.

Or in Maria Sharapova’s case, no doubt, all three.

As the new Wembley Stadium goes on show for a worldwide television audience at Saturday’s F.A. Cup Final, details of a late addition to the star-studded opening ceremony have been announced.

Where: On the pitch, near the centre circle.

When: Just before kick-off.

Who: All the wives and girlfriends of the England World Cup Squad 2006

What: Six of the best with a traditional rattan school cane will be administered by the England team physio to the bare bottom of each WAG.

Why: Steve McClaren, the new England manager, feels that the WAGs’ conspicuous high spending in designer stores and raucous partying in the bars of Baden-Baden, had a harmful effect on the teams’ performance in the World Cup.

T.V. Coverage: Live, complete with slow motion replays, commentary, and after-punishment interviews and analysis. Those punished would include:

Melanie Slade (above right), the 18 year old girlfriend of Theo Walcott the team’s youngest player, would be exempt from punishment, but would still be led out onto the pitch and have to watch from close quarters as a warning about her future conduct.

Isn’t it amazing how often big pants seem to make the news?

First, there was all the big pant hype that accompanied the two Bridget Jones films.

Then a couple of weeks ago, the papers were telling us that big pants are to blame for turning girls off athletics. Apparently runners such as Paula Radcliffe don’t look trendy enough to attract young girls into the sport, so they’re going to hold a competition to design a new cooler-looking outfit for female athletes to wear.

Now, according to the Daily Express, ten per cent of women swap their sexiest matching underwear sets for comfy Bridget Jones-style pants just a month into a new relationship.

Since The Spank Statement supports the wearing of big pants at any stage of a relationship, all this media coverage about erm… pant coverage can’t be doing the cause any harm. ‘Any publicity is good publicity’ is how I look at it.

In the arena of sport it’s not just athletics where controversy rages over the issue. Netball also suffers from an uncool image problem, especially in comparison with beach volleyball where skimpy bikini pants are compulsory.

The netball outfit has already been updated, and fashion conscious readers may wish for an illustration of this important development. So I’ve rigged up a before-and-after image, just to help you keep up with the times. 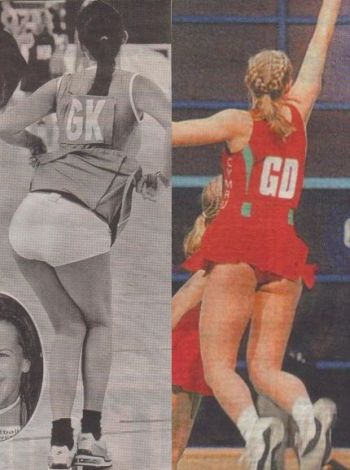 But in the world of fashion nothing is ever simple, and it should be pointed out that in tennis for years the trend has been in the exact reverse direction, but more on that around Wimbledon time. 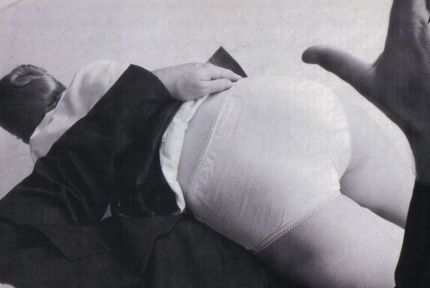 I know beach volleyball is highly popular with you all, and not just because of the skimpy rear-end revealing costumes. This sport has institutionalised bottom smacking. After every point there is the ritual of mutually supportive bum patting, and I understand that some teams even spank each other in code! The aim being to pass on secret messages about strategy for the next point. 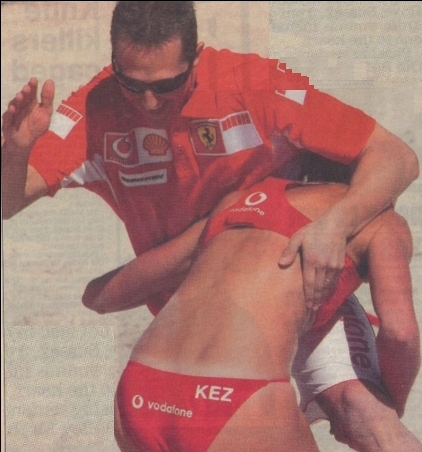 However, that’s nothing compared to the disciplinary procedures that some coaches employ when their charges mess up during training!

I don’t know why these Formula One Pit Lane girls are spanking each other, but there seems to be a bit more to it than just a stunt for the cameras. The two girls getting spanked have had to pull down their shorts first, so perhaps they were paying some kind of forfeit. Lets hope the blonde on the far right got round to delivering a swat or two after she’d done saying cheese. Cheerleaders from other sports please follow suit. 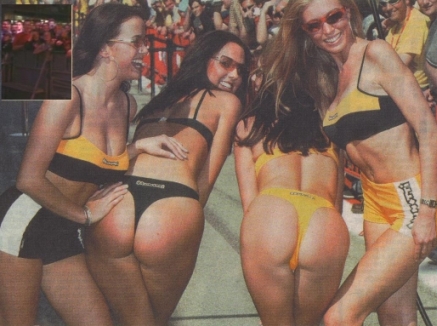 Footballer’s Wives itself could do with using a storyline like this. Unless I’m mistaken, this show is written by the same team that wrote Bad Girls on which the excellent spanking web-site Bars and Stripes is based. Wouldn’t it be great to see the influence working the other way too!