Harlots is set in an 18th century brothel or “boarding house for young ladies” and follows the lives of the sex workers and their patron. Featuring Jessica Brown Findlay, formerly Lady Sybil in Downton Abbey and a former Brit Bot of the Week, the show follows Charlotte Wells as she works as one of London’s high-end courtesans. The trailer has just dropped and there’s a birching scene but it’s not too clear about the orientation (F/M or M/F?). I’m looking forward to watching this upcoming series anyway.

This earlier Spank Statement about Georgian London gives more background on this rich period for our kink.

Just a bit of chat that doesn’t go anywhere, but I liked it so I thought it was worth posting. It’s a spoof of a 1960s TV talk show.

A Polish music video with a Christmas setting.

The title means ‘You’ll get a smack’. The rather bored lady gets the smack (OTK, but only one) at 2.30, but be warned, there’s some M/M hard on its heels.

The still shows them on the green screen stage.

Thanks to Harry. Last year’s Santa spanking picture was good too.

The cast perform a song from the new Andrew Lloyd Webber musical Stephen Ward. This could be more interesting when it is actually staged of course as the scenario is a swinger’s party at which the guests pair off and play a spanking game. The show is based on a book and lyrics by Christopher Hampton who has some previous form. He wrote the play on which A Dangerous Method was based.

Charlotte Spencer (left) and Charlotte Blackledge (right) play vice girls Christine Keeler and Mandy Rice-Davies, respectively, in the show which is set in 1960s London. The quote below is from an interview that the pair gave to The Guardian.

Update:  Rehearsing their technique? Christine and Mandy have some fun during a scene in Stephen Ward’s flat.

Needless to say, there’s no follow up and we don’t find out if the boyfriend gives the bully her spanking. If this was set in the 1960s or 70s the stereotypical games mistress would have done the job back in the changing room after the match. Another bottom – this time a very red one – for the girls to stare at!

What is the impact of a blow you witness? Does it shift as the perception of pain, pleasure, ambiguity, shifts? IMPACT is a short that invites the viewer as voyeur to experience a strangely intimate and ultimately challenging series of encounters. How do they impact you? 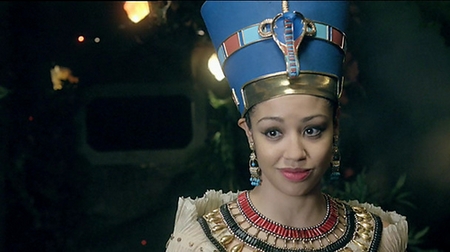 Hot on the heels of Parade’s End, there was another spanking threat on the BBC, this time in family sci-fi series Dr Who.

The Doctor has met some impressive women from history, including Agatha Christie and Elizabeth I, but in the episode Dinosaurs On A Spaceship he is joined by one of the feistiest of them all: Queen Nefertiti of Egypt as played by Riann Steele. The haughty Queen is threatened with an over the knee spanking by an African big game hunter (Rupert Graves). The Doctor’s companion Amy Pond raises her eyebrows in surprise. So did most of the viewers.