Luther has chosen to restrict his selections to scenes from the 21st Century in honour of his number one choice! Now I wonder what that could be…

(Editor’s note: *Credit to Chross’ movie database for providing most of the links. * means the link is download only.)

The schoolgirl/ruler combo is not actually a particular favourite of mine, but for those that who do like it, this is likely as good as you’re going to get in a mainstream film (albeit very much at the B-movie, straight-to-video end of mainstream!).

Dina Meyer demands and receives a few good smacks on her very pert behind.

The scene itself is basically off-screen and played for laughs, but this is still a fine offering. It helps that Gillian Jacobs is gorgeous and the build-up – where she slowly comes to realize what she’s let herself in for but has to go through with it to prove she is not a hypocrite – is delightful.

Clive Owen’s character needs to create a diversion in a crowd – and after spotting an attractive mother smacking her child, approaches her and demands she stops. When she rudely refuses, he simply starts spanking her as she’d been spanking her child. Unfortunately filmed from the front and in a standing position, we don’t get to see a particularly good spanking, but I just love the scenario of the angry mother getting a taste of her own medicine and this movie is such an unlikely source. Rarely for a modern scene, this is very much non-consensual.

Two scenes here (there is also sort of a third but it’s a single self-smacker from what I remember). The Jessica Alba scene is rather brutal for my tastes, particularly in light of what follows in the movie, and mostly offscreen – but it is notable not just for featuring one of the most well-known actresses in Hollywood but for a nice build up where Jessica’s character provokes the cop until he reaches breaking point. In a less intense film in another era, it could have then gone to a good old-fashioned OTK spanking.

This scene occurs in two parts – the first where the young lady broaches the subject and asks for a spanking. Initially her drippy boyfriend finds it all too weird and won’t do it. However, he has a change of heart and gives her what she wants. I haven’t seen the movie but by the ending of the spanking it seems to have a distinct undertone that the spanking has become a punishment due to a disagreement between them about her friends. At this point she cuts it short.

4. The Young and the Restless (Michael Graziadei/Marcy Rylan, 2010)

The spanking is all-too brief, but this scene is still notable as being the closest any recent scene has gotten to the classic old-fashioned scenario of a woman behaving like a brat and earning herself a spanking. Just two smacks are given and not particularly firmly, although the scene gets some credit for at least positioning her so we can see the swats. Her outraged disbelief: 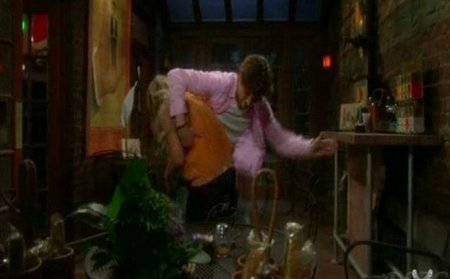 (“Are you insane? You just spanked me!”) and his satisfied ‘someone had to do it’ response are textbook. If only he’d taken her OTK and done it properly.

Quite probably the one that re-started it all, bringing spanking back into mainstream acceptability. There’s not much to say about this one as I can’t believe there’s anyone reading this blog who hasn’t seen it!

Sudden and sexy spanking in the backseat of a car, this scene is a true classic with Mary Louise Parker’s dress being lifted for some 20 smacks. The subsequent scenes bear the Secretary influence with Mary happily admiring the red marks on her butt in the mirror. This is backed up further in a recent episode by spanking being incorporated into a sex scene at her instigation. 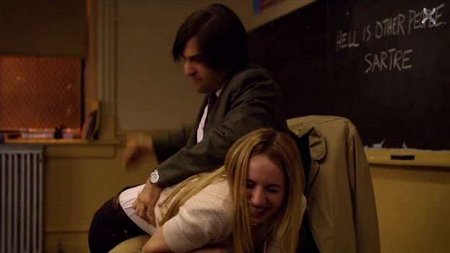 Attractive young woman suggests some student-teacher spanking role-play in the classroom and this guy (unlike the drip from Normal Adolescent Behaviour) happily obliges, albeit needing a bit of encouragement to spank harder. Once he gets going, it’s an exceptional scene, as sound and realistic a spanking as I can remember in a mainstream production.

The scene perfectly balances sexy and funny, with Zoe Kazan’s flirtatious behaviour, perfect positioning, and expressions of pain/pleasure during the spanking – followed by the punchline of the janitor’s inopportune arrival. She strolls off swinging her hips, leaving her man (and us) wanting more – one can but hope it is a precursor for further scenes in future episodes.

A perfect build-up but possibly the biggest wasted opportunity ever!

The post-Secretary boom in spanking scenes is currently yielding rich rewards – particularly on TV, where Weeds and Bored to Death have offered two of the finest mainstream scenes ever, and it’s nice to note that 3 of the 10 scenes here came from this year.

I’m still dubious whether we’ll again see a mainstream scene like Frontier Gal where a woman is spanked OTK for punishment, but without it being played as sadistic. Nonetheless, the past five years have offered more scenes in mainstream American productions than probably the previous three decades combined, even affording me the luxury of leaving out some good recent scenes (Fish Tank, Sugar Rush, The Private Life of Pippa Lee, several S.American soaps, possibly others I’ve forgotten). Long may it last.

Many thanks to Luther for this thought provoking selection of modern scenes. Please keep the top tens coming. Just send me an email listing your personal 10 best mainstream film or tv scenes and some reasons why you rate them so highly.