These days you are unlikely to find a cartoon featuring an adult female being spanked in a newspaper or magazine, but back in the day, things were very different – marriage counselors spanked errant wives, husbands spanked well-behaved wives, fathers spanked daughters, patients spanked their psychiatrists, generals spanked WACS, policemen spanked illegal parkers, bosses spanked pouting secretaries, – there was nothing more politically incorrect, or fun, than the world as portrayed by spanking cartoonists.

So let’s take a nostalgic trip back through the ages and look at some wonderful spanking line art. The origins of spanking cartoonery can be traced back to at least the 18th Century when satirical artists such as James Gillray lampooned the lords and ladies who were the celebrities of their day. Our current journey begins in the 19th Century with a royal lady whose name is synonymous with the era. 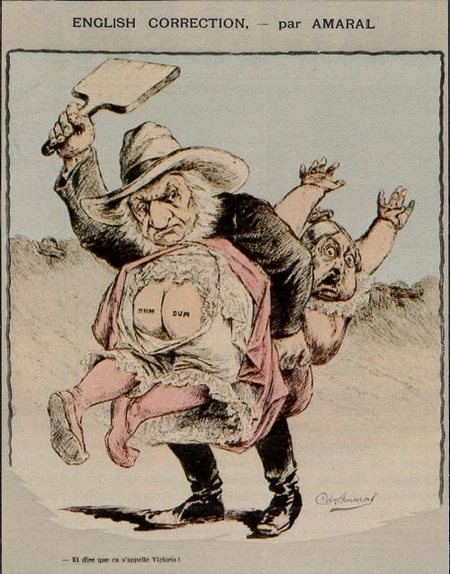 The background to this picture is that the British army had provoked international outrage for its use of expanding ‘dum dum’ bullets in the Boer War. Queen Victoria is having another fearsome weapon used on her by Paul Kruger who was the President of South Africa and the face of Boer resistance against the British.

In early 20th Century America cartoons reflected the ordinary family life of the period. This father/daughter spanking comes from The Washington Post of 1928. (thanks to JS666). 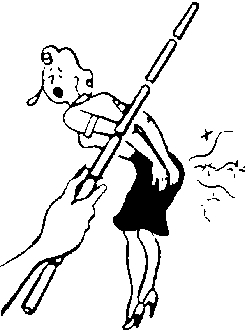 And this is from a 1939 issue of Picture Post which included a series of letters on the subject of caning and spanking. 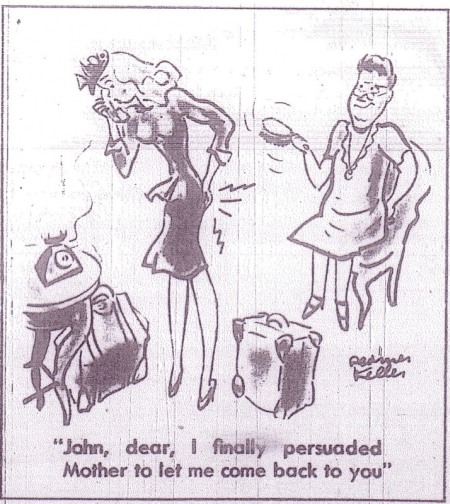 This classic from the Detroit News in 1947 is a rare F/F spanking cartoon, although the husband is still behind it all. (thanks to JS666).

In this one, a cute blonde experiences the credit crunch at first hand – 1950s style! 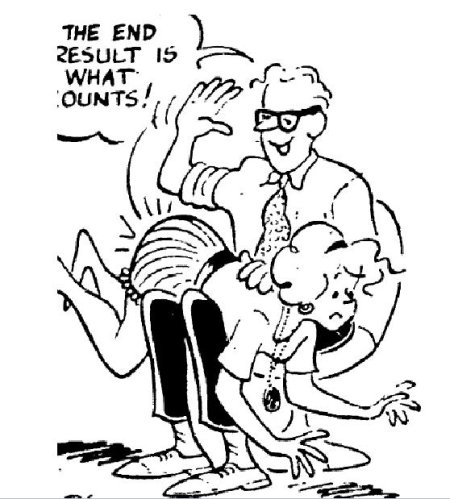 This is a nice 1960s husband and wife OTK spanking.

Mini skirts, platform boots, flares, purple panties – the fashions show that this could only come from the early 1970s but the driving instructors methods definitely belong to the old school.

The rise of feminism and political correctness meant that by the 1980s and 90s, you had to turn to fetish publications to find spanking cartoons, but spare a thought for this poor miss who can’t decide if she prefers burning her bra or burning her bottom!

Update November 2012: Thanks to Harry for the following body of evidence that the spanking cartoon is alive and thriving, especially in Latin countries, where they are often used to lampoon female politicians. The links take you to photos of the spankees. 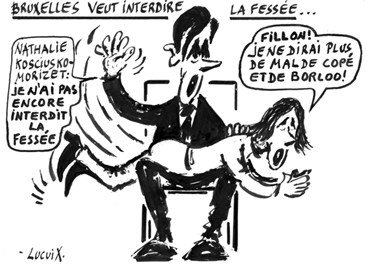 France, 2008 – Secretary of State Nathalie Kosciusko-Morizet accuses one of her colleagues of cowardice. The Prime Minister, Francois Fillon, forces her to make a public apology. A cartoonist puts his own interpretation on events.

From Spain in 2009 – the Prime Minister (Jose Luis Rodriguez Zapatero) spanking the Defense Minister, Carme Chacon after she jumped the gun announcing the withdrawal of Spanish troops from Kosovo. The caption translates as: ‘Obama Surprised: If Carme Chacon is the smartest minister, what will happen to the rest of them?’

France November 2009 – President Sarkozy spanking Rama Yade, the French sports minister, who had been criticizing him and the policies of his government, and who was called a ‘spoilt child’ by her cabinet colleagues. As political cartoons go this is quite attractive (it helps that the target is quite young for a politician – 32 at the time). 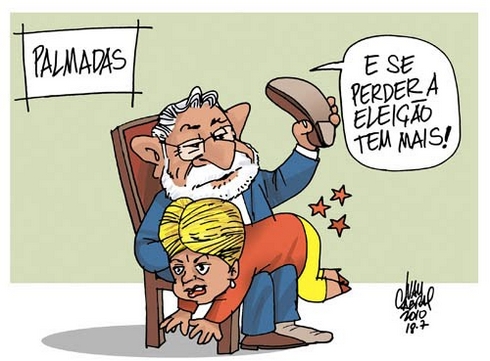 The one is about the Brazilian presidential elections of 2010. The speech bubble translates, roughly, as ‘This is what you get for losing the election’. In fact the lady being spanked, Dilma Rousseff, won the election and is now Brazil’s first woman president. The man with the distinctive ears who is spanking her is her predecessor in office, Luiz Inacio Lula da Silva, who belonged to the same party (which explains why he would want to spank her if she lost).

Another Brazilian cartoon from 2011 showing the right-wing opposition politician Jair Bolsonaro spanking Congresswoman Teresa Surita, who passed a ‘lei da palmada’, a law banning the spanking of children. Bolsonaro declared, ‘If this bill is passed, the next step will be to ban Hawaiian sandals (i.e. flipflops).’ and the caption has him saying, ‘But before flipflops are banned, I’ll use them in the best possible way.’

This recent political cartoon shows Italian minister Elsa Fornero being spanked for interfering in a workers’ rights law. The caption at the top translates as ‘Let’s Weep’, and the worker is telling the minister, ‘How many times must I tell you? Article 18 must not be touched!’

We began this journey through time with Queen Victoria, so let’s finish with the current Queen of England, being spanked by a kinky S&M version of Prince Philip. The corgi dogs seem alarmed. 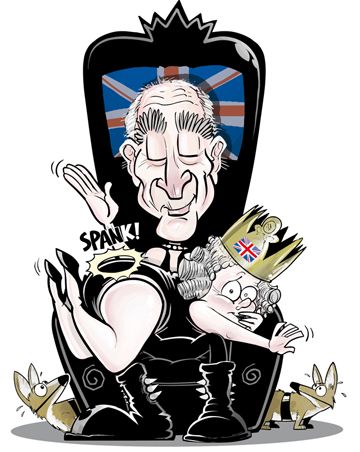 Definitive coverage of spanking cartoons both mainstream and fetish including the classic Humorama cartoonists such as Kirk Stiles and Dan de Carlo can be found at the Chicago Spanking Review.