I forget the name of the player who wore these knickers with a cheeky message at Wimbledon in the 1970s. You can see she’s only on one of the smallest outside courts though.

I suspect that Venus Williams won’t take the “no panties” look onto centre court this year either, but it would be great if she did, and even better if Maria Sharapova followed suit! 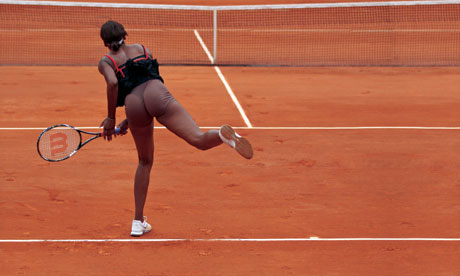 Talking of Maria Sharapova, she’s one of the stars of The Sun’s gallery of “Top 10 best tennis bottoms” which you can check out here.

If that doesn’t get you in the mood for watching IT at Wimbledon, then maybe this “consumer test” for women’s tennis pants will do the trick.